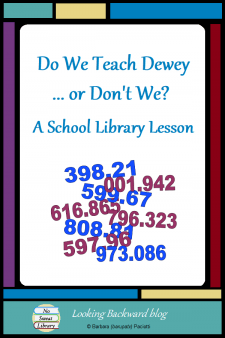 I don’t teach the Dewey Decimal Classification System during Library Orientation. In fact, I don’t teach it at all. The eye-opener came my second year as a librarian when I was telling students (during an incredibly boring orientation) that library books were originally shelved behind the circulation desk, and the DDC was created so librarians could organize books to find one when a patron asked for it. I suddenly realized that DDC is for me to know for organizing books, not for students to know for finding one. Students only need to know how to find a number on a shelf, and anyone who can put 3 numbers in consecutive order can do that—even a kindergartner!

CAN I JUSTIFY NOT TEACHING DEWEY?

Nowhere do the new AASL National School Library Standards ever mention the Dewey Decimal Classification System. (Nor did the Standards for a 21st Century Learner!) It’s not even listed in the Glossary or the Index. For the Shared Foundation CURATE the NSLS offers this:

Notice that it’s only the School Library level that is concerned with classification or a system, which is often handled at the district level. The School Librarian’s main concern is to simply help students use the system to find what they need. I particularly like the wording of Think #2, and I’ve written about designing such opportunities for science and for social studies in a way that coordinates DDC with both “the discipline” and with classroom learning.

Nothing in NSLS states, or even suggests, that the learner needs to know details of the Dewey Decimal System. After identifying whether the school library has a book they need, a learner only needs to be able to find the book on the shelf.

WHAT TO TEACH INSTEAD OF DEWEY

Education is changing from a content-based mentality to critical-thinking and problem-solving, so why teach a content-based lesson on Dewey? DDC organizes Classes & Divisions “by discipline,” but few School Librarians honestly understand the difference between “class,” “division,” and “discipline” well enough to explain it to each other, let alone a kid—who doesn’t need to know that at all. Most School Librarians only know a few Dewey Divisions. Quick: name the 10 Divisions of the Science 500s or the Arts & Leisure 700s. And those are the easy ones. 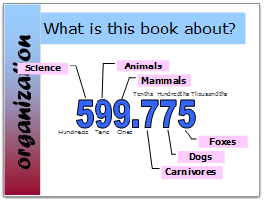 A slide about place value from my math lessons.

The school library is all about problem-solving, and we need to make our lessons about how to use an organization system to locate resources. Students only need to understand that each place value in a Dewey decimal number stands for a more specific subject or topic, so more decimals mean a narrower topic of a book. What those subjects or topics are should be a sign on a shelf, not a scrap of trivia in a kid’s brain.

This goes beyond just a lesson; it touches on the latest trend of dumping Dewey for a “kid-friendly” word-based system. I’m astonished when I hear this, since Dewey is itself a short, simple notation for locating a book on the shelf. I doubt that kids are any more likely to “learn” letter acronyms than Dewey numbers.

Granted, for elementary students, especially very young ones who haven’t learned about decimals, Dewey numbers may seem a bit daunting, but even a kindergartner quickly learns to count to 100, and helping kids discern and practice numerical order is a more important skill to focus on than what the numbers stand for. It’s incredible that many of my 6th graders can’t do this, so a lesson activity that sends kids off to find books by number is not only a better strategy for the library—and for reinforcing Math skills—but it’s a lot more fun! At least it always is for my 6th & 7th graders after I changed my lessons from content to process!

DO DEWEY WITH MATH CLASSES 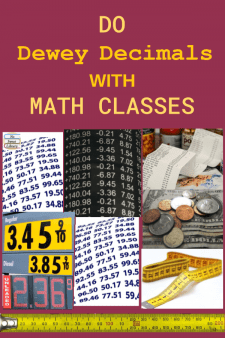 I suggest that our reluctance to focus on number location is due to math anxiety—after all, most librarians seem to come from a language arts background, not a math one. But think about it: Numbers and decimals are part of the math curriculum, so why not bring in math classes for a Dewey lesson? They rarely visit the library, and a Dewey Decimal lesson gives Math classes a curricular reason to visit the library, especially if we offer a practical, hands-on application of decimal concepts. And it certainly answers the common question in math about “When are we ever going to use this?”

Thanks to a suggestion from my library colleague, Cindy Nietubicz, I bring both 6th and 7th grade Math classes into the library for a Dewey Decimal Lesson. The timing is perfect for us: these math classes begin decimal units about 5 weeks after school begins, our ELA fiction reading pattern is well established, and students are eager to check out Dewey books.

My math lessons serve to activate prior math knowledge about what students should already know about decimals, so it prepares them for what they’ll be learning during their upcoming unit. With 6g students we review place values and sequencing decimals; with 7g students we review adding and subtracting decimals. Students practice how decimals are used in the library by locating Dewey-decimal-number books on the shelf. Math teachers like having this fun, non-graded review where they can see which students are having trouble with decimals.

After the practice activity, students have plenty of time to browse for Dewey books to check out. Many get an interesting book they find during the activity. Others are stimulated to use my signage to find Dewey numbers of their favorite topics. When students are seated, we follow the same silent reading and invited checkout procedure that we use for ELA classes.

Math teachers love these lessons so much that they come to me early in the school year to see when we can schedule them into the library. It also whets their interest in collaborating on other math-related lessons in the library. Students love these lessons, too. Sixth graders are always puzzled about why they’re in the library with a math class…most have never done that before. What amazes me is how many comment afterward that now they understand how all those numbers work, which is, of course, the whole point of teaching Dewey numbers to our students.

If the slide images above have sparked your interest, you can find my Dewey Lessons in my NoSweat Library store on TeachersPayTeachers, as well as my colorful Dewey Subject Signs & Shelf Labels.

WHY DO I SAY “DEWEY NUMBERS”?

Should you be wondering why I deliberately use the phrase Dewey numbers—and Dewey books—I identify areas of the library by what’s on the spine labels of the books; since there’s a Dewey number on the spine labels, it’s the Dewey area of the library. My decision to begin doing this came during the aforementioned (incredibly boring) orientation: I was explaining that we separate fiction books from the 800s into their own area of the library, but the ‘non-fiction’ area still had some fictional books, such as aliens, fairy tales, and poetry. I thought, “Why am I making this so confusing to students? If I just call them Dewey-number books I’ll alleviate confusion and questions!” So from then on, that’s what I called them. Now I clarify with students that ‘non-fiction’ is about the content of a book, not it’s location. If you take anything from this blog post, I hope it’s the terms ‘Dewey area’ and ‘Dewey-number books.’ Our kids deserve common sense.