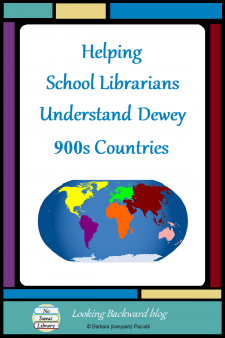 Many school librarians are confused about the way the countries in 940-990 are organized, so I’d like to rectify that if I could. Between studying Dewey Abridged and drawing on my Social Studies background, I’ve discerned a pattern to Dewey number assignments and hope to make it a bit more understandable—although some of it is a complete mystery to everyone but folks at OCLC!

First, each continent and country has a specific number in DDC Table 2, and both 910 Geography & Travel and 940-999 History use those Dewey numbers. (Because country books are used for social studies research, most school libraries include geography with history and assign books to 940-990 History numbers. ) The arrangement of these country numbers can be confusing, especially within each Division of 940-999. We think of History in terms of political timelines, but Dewey numbers in Table 2 are assigned geographically because a location’s political affiliation may change but it’s place on the Earth doesn’t.

We realize that DDC is Anglocentric, so it’s not surprising we begin with the continent of Europe at 940, then move to 950 Asia, 960 Africa, 970 North America, 980 South America, and 990 Australia & Oceania. Dewey 900 numbers for individual countries within the continents appear to be assigned geographically from North to South along latitudinal lines and West to East along longitudinal lines. The N→S pattern is more consistent on a continent than the W→E, beginning from a NW or NE coastal country, moving south along coasts, and lastly covering inland central continental locations.

(Rather than true geography, it appears to me that many numbers are based on Anglocentric exploration & conquest of water-accessible locations.)

Europe begins in the British Isles at 941 Scotland/Ireland, moves SE to England/Wales at 942, then moves E into central Europe with 943. It moves SW to France with 944, then E to the Italian peninsula at 945, then back SW again to the Iberian peninsula at 946. Rather than picking up the rest of the western countries, numbers jump NE to Eastern Europe, including Russia, at 947, and move NW to Scandinavia at 948. The 949 numbers are an odd mish-mash, moving from Iceland SE to the small English Channel countries, over to Switzerland, then to Greece and the Balkans.

Asia starts on the Pacific Ocean with 951 China/Korea and 952 Japan, then jumps SW to the Arabian peninsula at 953, then back E to India at 954. Numbers next move inland W to 955 Iran, and further W to the Mediterranean & Middle East at 956. Then we go back inland NE to 957 Siberia and 958 Central Asia. The continent finishes, oddly, with Southeast Asia at 959. (Perhaps because those were European colonies and when they become separate countries they couldn’t fit the numbers anywhere else!) 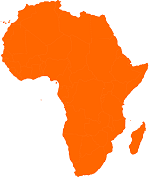 Africa appears to follow an Anglocentric geo-historical water-access exploration/conquest pattern. It begins at 961 with the north-central Mediterranean coast, then moves E along the coast for 962, then S along the Red Sea for 963. Numbers jump across the African continent to NW coastal nations for 964 & 965, moving S then E along the coast for 966. The 967 numbers cover central sub-Saharan Africa, from W to E. Numbers then move into Southern Africa with 968, starting with South Africa and moving inland N to countries along its borders, from W to E. Fittingly, 969 is the island of Madagascar, along with other southern Indian Ocean islands. 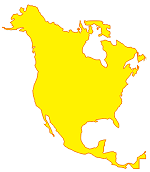 For North America, it’s easy to understand that 971 Canada is first geographically, but, against all reason, 972 Middle America—Mexico, Central America & the Caribbean—is next. (Perhaps because they were explored earlier or because OCLC just wants the U.S. last.) The rest of 970 is the United States, with numbers moving more historically from E to W from 973 to 979. Interestingly, Alaska is included as a U.S. state instead of geographically with Canada, but Hawaii isn’t included at all. (See below.) 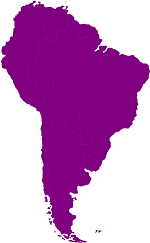 South America begins on the east coast with 981 Brazil, and follows the coast S to Argentina, then around W to Chili at 983. Succeeding numbers move N along the Pacific coast to Columbia at 986, then back E along the northern coast to complete the circle. Historical latecomers Paraguay & Uruguay finish at 989. 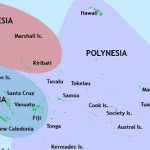 The N→S/W→E pattern is abandoned as numbers move into the 3 geo-cultural areas of the Pacific Ocean islands—also referred to as Oceania—first N into Melanesia, then E into Polynesia, then back NW into Micronesia.

Curiously, 996.9 is for the Hawaiian Islands, and while they are in the middle of the north Pacific, this numbering makes no sense for 3 reasons:

As I said, the 990s are weird, and there is no easy way to understand the last 3 number assignments: 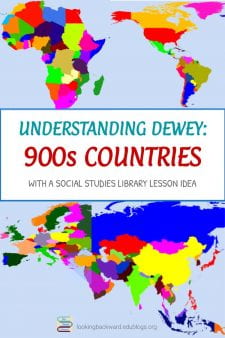 Pull enough country books to put a dozen or so on each table, making sure to have at least one book for each of the 5 multi-country continents. Students use the books and Dewey numbers to group books by continent, then write the continent name and main Dewey number of the continent on provided sticky notes and add to the stack of books. Students next find a new country book from the shelves so each one from a table brings one for a different continent. To make this a graded review activity, provide a map worksheet of the continents with country outlines and students record the countries at their table, along with their Dewey number, in the proper place on the map. If time permits, students can rotate to different tables and try to fill in all the countries on their map.