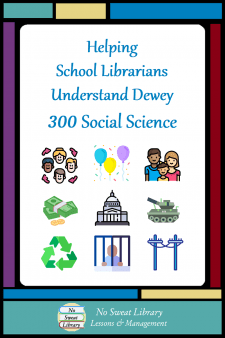 If your school library collection is like mine, the 300 Social Sciences takes up large part of your Dewey area. What boggles the minds of students, teachers, and School Librarians alike is the mish-mash of disparate topics with an arrangement that doesn’t make much sense. Plus, the 300s seem to have many books that belong in other Dewey sections!

As a lover of the Dewey Decimal Classification system and a college major in the Social Sciences, I hope to help you understand this Dewey Class…and suggest some changes that might better serve your students and teachers.

THE METHOD OF ASSIGNING DEWEY NUMBERS

Remember that Dewey Decimal Numbers are assigned by discipline, that is, the field of study—the profession. How does that differ from subject?

A particular subject, then, can be assigned more than one Dewey number depending on which profession uses the material for their own purposes. Here’s a DDC example of a simple water report that can apply to 5 different Dewey numbers:

Use 333.91 for monitoring to protect water quality, 553.7 for chemical & biological status, 363.6 for assuring compliance with standards, 628.1 for technical aspects of water treatment, and 628.93 for effectiveness of sewage treatment. (Abridged 15, p65.) [edited for brevity]

Also keep in mind that books for more than one discipline or subject are assigned the lowest Dewey Decimal number that includes all disciplines—using the rule of two or the rule of three. This explains why the 300 section is so large: its numbers are lower than 6 other Dewey Classes, so multiple subject/discipline books are placed in the 300s rather than where we might need them for our school curriculum.

Visit my blog posts on Dewey 590s Animals for more about disciplinary alignment, and Let’s Put Dewey Decimal Books Where Students Can Find Them for more on the rules of two & three.

WHAT DOES 300 SOCIAL SCIENCE REALLY INCLUDE?

Since these four disciplines are about social relationships and the organization & function of human societies, I’ve chosen a more specific name for this Dewey number which students understand better than the generic “Social Sciences”:

Unfortunately, the materials for these 3 broad headings are not necessarily in contiguous divisions and sections, so here’s the 300 divisions each one encompasses:

NOTE: You probably won’t have any 310s in your school library because it’s just for statistical records.

300 Sociology & anthropology
The 300s begin with society, specifically sociology & anthropology. If we consider psychology (the 100s) as the social science of the individual, then 300-307 is the social science of groups. It includes behaviors like bullying, gangs, prejudice & discrimination; interactions such as social change & civil disobedience; and relationships between individuals, groups, and communities. It does have one section important for School Librarians:

360 Social problems & services
This division may be, I suspect, the one that gives School Librarians the most headaches. It’s categorized according to type of problem and how the service is provided:

Some books in this division are victims of the rules of two or three, such as substance abuse and mental & physical disorders. I relocated many of these to appropriate higher numbers for better student access.

363 Other social problems and services
If the 360s are problematic, this section is particularly exasperating for School Librarians. Like any “other” section of the 300s, it’s a dumping ground for disparate topics. To understand what’s covered in this section, think of it as the basic needs of Maslow’s Hierarchy: physical needs for human survival, and our need for safety & security.

It’s no surprise that 320 Political science, 340 Law, and 350 Public administration & military science align with the 3 branches of U.S. government. (Be aware that other countries may not have this structure, but most of those books are in the 900 section. ) 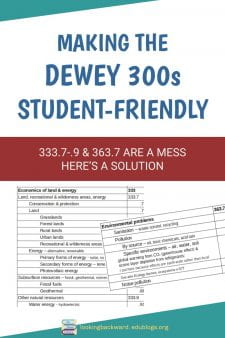 330 Economics
Economics is probably nestled between 320 and 340, because legislatures (320) set taxes and budgets. This division also includes careers, money, banking, credit cards, the stock market, and taxes. (You may also see books on socialism & communism because they are economic-based systems, but I prefer all books on types of government together, so I relocated mine to 321.)

School Librarians need to know that 330 also covers economic development and management including that of natural resources, so that’s why we find a sizable group of books in 333.7-333.9. I actually added decimals to my books to differentiate between the different topics, according to the table below:

380 COMMERCE, COMMUNICATIONS, TRANSPORTATION
This division may seem redundant with topics in 330 Economics; however, this division is for regulatory aspects (law & public administration) and public consumption—the socio-cultural perspective of ‘products’ & ‘people’, that is, services that sustain or benefit our way of life. Here we find:

You may see here books that are topical with those in the 600s, and they may get increased circulation by relocating them there.

Near the end of the 300s we find the two divisions relating to culture and it’s institutions.

370 Education
Education is how our culture and traditions are passed down from adults to children. Most books with this division number will be about teaching, so will be shelved in our Professional collection. You may, however, want to do as I did, and build a circulating group of books on schools for the historical time periods our students study in their social studies classes, and books on study skills topics.

390 Customs, etiquette, folklore
This is the division we probably think of when we refer to “culture”. It differs from 300 Sociology & anthropology in that 300 is about groups & institutions, whereas this division is about our personal or informal way of life. We find here sections on personal adornment such as clothing & accessories, cosmetics, jewelry, and body alteration like tattoos and body piercing.

We also find sections on customs for home & family life, death, and special occasions, like marriage, festivals, birthdays, and holidays. Interestingly, it’s also where we find such arcane topics as cannibalism and taboos. The topics may seem similar to 306 Culture and institutions, but 306 is about behaviors and interactions, whereas these sections are for specific celebratory rituals. 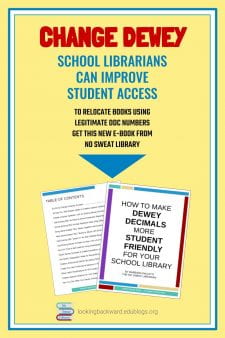 Many School Librarians get frustrated with the Dewey Decimal Classification system and want to “genrify” it like we do our fiction literature. I believe this is because they don’t understand the purpose of DDC:

“works that are used together to be found together.”

It’s that purpose of DDC which gives us the freedom to change a Dewey number. Since our disciplinary use is different than career professionals, we can locate books where they will better serve the needs of our school curriculum.

For example, one DDC rule of two/three victim is U.S. slavery before the Civil War. Books on this subject can be found at 2 places in the 300s:

I didn’t like either location, so I changed all these books to a little-used but legitimate DDC number where students would find the books within the historical time period:

This number already includes the Underground Railroad and the Emancipation Proclamation, so now all U.S. slavery books are together. After relocating the books, students easily discovered them there and even thought I’d bought new ones!

So, School Librarians don’t have to give up Dewey for radical organizational changes to make their school library more student-friendly. For additional creative ways to use DDC, get my new E-book How to Make Dewey Decimals Student-Friendly found at No Sweat Library, my Teachers Pay Teachers store.